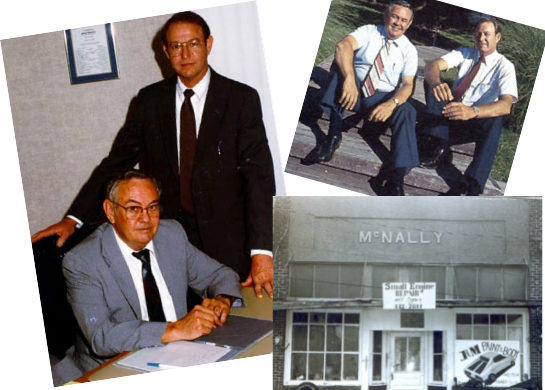 This year, Jack Henry & Associates, Inc.® (Jack Henry) is celebrating 45 years of being in business. Since the start of the company, a lot has changed – not just technology, but the way in which people do business has changed (especially this last year). However, even with all of the change that both the company and the world has experienced over the last nearly five decades, there are some things that have remained constant at Jack Henry. We remain as dedicated to our associates and clients as we were on day one.

So, to celebrate our first-ever Founders’ Day, we want to take a walk down memory lane and reflect on how it all started and where we ended up today.

The History of Jack Henry

Founders’ Day is the celebration of the inception of Jack Henry. Our journey as a company officially began on June 2, 1976. The plan for the business was carefully conceived on the back of a napkin, written by our founders, Jack Henry and Jerry Hall. Our first office? Space rented from an engine repair shop. Our first computer? Borrowed. The determination of Jack and Jerry to help lift-up communities by strengthening the connection between people and their financial institutions through technology and services is what drove the company forward to what it is today.

The idea for Jack Henry came to Jack when he was working as a data processing manager for Gillioz Bank & Trust. He realized that there were only a couple of data-processing software packages available for the banking industry (one of which he purchased and found it didn’t work). On top of that, only the larger banks at the time could afford in-house computer systems. Smaller community banks had to send their information to larger banks for processing. It became clear to him that there was a very large need in the market.

Jerry Hall was also a data processing manager, but for a company called Jumping Jacks, a division of U.S. Shoe Company. He and Jack would often drive over to Springfield, Missouri together for meetings and discuss opportunities that existed within the software industry. Once Jack’s company, Gillioz Bank & Trust, was acquired and his position was eliminated, talk turned to action. Jack decided to put his programming skills to use to create the company, and Jerry agreed to hop on board. In the beginning, it was just the two of them doing it all. But, by 1977, Jack Henry and Associates was incorporated and generating six figures in revenue.

Fast-forward 45 years and Jack Henry has gone from two employees to almost 7,000 – spread across the U.S. We are a well-rounded technology company with four different core banking platforms and more than 300 complementary products and services. We’ve acquired over 50 different organizations. Despite all of this, we’ve held true to our guiding principle to “Do the right thing, do whatever it takes, have fun.” It’s a philosophy every one of our associates today is still aware of.

Why We’re Celebrating This Year

This year marks the milestone of 45 years in business – and counting! We thought this would be the perfect time to celebrate our history as a company and how far we’ve come. The Jack Henry and associates culture is something that was, and still is, very important to us. In fact, Jerry was quoted saying, “Business is about people,” which is something we still believe today. It’s reflected in our core values: Passion for Customer Service, Relationships, Integrity, Drive for Results, Excellence (PRIDE). Every associate across the organization uses these values to make important decisions – whether it’s creating a new product, interacting with a customer, or even interacting with another associate. We’re proud to have stayed true to the vision Jack and Jerry had for the company’s culture. We believe it’s what has kept us going for 45 years and will keep us going for many more.

And we believe this is worth celebrating! We’re happy to celebrate our inaugural Founders’ Day with everyone and look forward to celebrating for years to come.

Fintech in a Flash: Fraud Mitigation is a Key Consideration When Selecting Payments Partners

What Network Uptime Means for Your Institution