Why Everyone Should Prepare for the 2021 Atlantic Hurricane Season 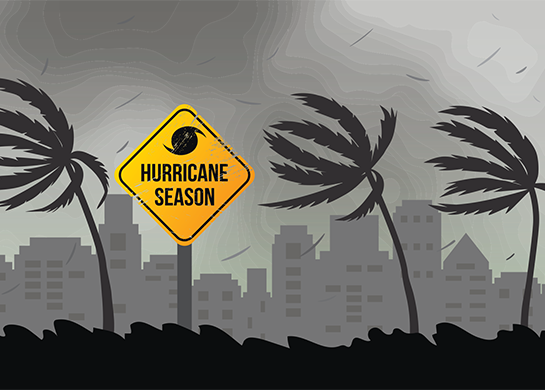 I’m aware that many of you reading this are probably scratching your heads right now. You might be asking yourself “prepare for the Atlantic hurricane season - why should I?” After all, if you aren’t near the Gulf of Mexico or the eastern seaboard of the continental United States, you probably aren’t going to feel the immediate effects of a landfalling hurricane – and that’s certainly something to be grateful for.

That said, there are a number of extremely valuable lessons to be learned from those financial institutions (FIs) in the potential impact zones that every FI out there, outsourced or not, can learn from.Hurricanes are one of the few impactful disaster scenarios you can actually prepare for. Often times, the projected impact areas have 3-5 days to prepare. According to AccuWeather, another above-average season is forecasted for 2021, with 16-20 named storms predicted, 7-10 of which will be hurricanes. Depending on how many of those turn out to be US landfalling storms, there could be a lot of preparation exercises and response scenarios playing out in the coming months.

Let’s take a moment and focus on the preparations an FI goes through when they are in or near the projected cone of error for an approaching named storm. To prepare, they ask these questions:

FIs that can be directly impacted by a landfalling named storm don’t just prepare for site down scenarios, they prepare for site gone! I think we’ve all seen pictures of where an FI used to be, with only the vault remaining on an otherwise barren slab of concrete. This would be a good time to also ask yourself and your leadership team – are we prepared for a site gone recovery?

Business Continuity Awareness Week (BCAW) is an annual event that fell between May 17th and 21st this year. The theme for 2021 was “Business Continuity Starts with You.” The theme is a good reminder that preparedness is an individual responsibility that brings together other individuals, groups, management, etc. to create a layered, coordinated approach to response.

So, if you’re still with me, and you aren’t in a landfalling US named storm impact zone, please revisit those earlier questions through the lens of this hypothetical scenario – the site gone event that impacted your FI occurred last night. No warning, no time to organize a response, no time to line up the ducks and listen for uniform quacking. None. It’s morning, and you have just learned that your operations center is gone.

Let’s repeat those earlier questions and ask them from a slightly different perspective:

If you’re tempted right now to console yourself with the ‘it won’t happen here’ response, I strongly encourage you not to run and hide there. We shouldn’t have to look any further than all of the events from the last 16-18 months to know that just about anything can happen anywhere.

I’m willing to believe that your customers and employees aren’t just there with your FI because they don’t have a choice. I think we have to believe that both groups are there with your FI because they choose to be there. That means there’s something about your FI that attracts and retains customers and employees. They say “The best time to plant a tree was 20 years ago. The second best time is now.” The same can be said for effective operational resiliency planning.

As a state or federally chartered FI, you should already have business continuity and disaster recovery plans in place, and those plans are tested at least annually. But, if those are simply “check the box” plans, there’s never been a better time than now to fix them. Show your employees a commitment to improved resiliency, and let the roots of your new program and plans take shape. It’s not too late!

Covid-19: A Look Back at How Our Fraud Predictions Panned Out